Viral photo of Pasig City, a wake-up call to pass important bill on land use 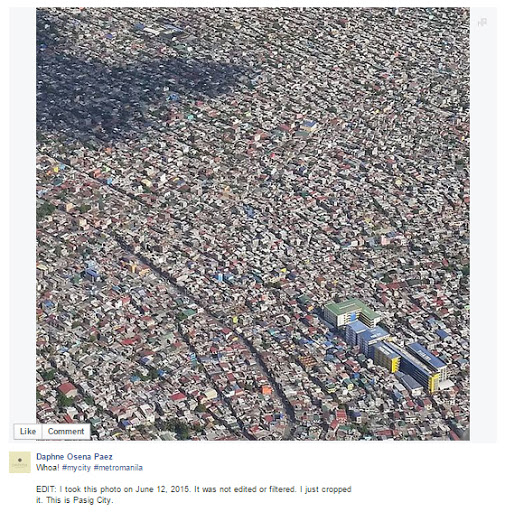 Alarmed by the viral photo of the congested Pasig City, land use advocates demand for better distribution of land resources in the country.

The Campaign for Land Use Policy Now! network (CLUP Now!) states that the photo must serve as a wake-up call to the legislators in the Senate to immediately pass the proposed National Land Use Act (NLUA). The said bill seeks to address the issue of land scarcity through institutionalizing a comprehensive land use and physical planning mechanism for all parts of the country. According to CLUP Now!, the photo taken by local celebrity Daphne Osena-Paez clearly reflects the effects of poor urban planning and the lack of a comprehensive land use plan.

“The congestion is a typical effect of unplanned urban development,” explained land use expert Elmer Mercado. “The urban sprawl becomes uncontrolled due to lack of strategic planning and strong zoning regulations.”

Mercado added that poor planning and uncontrolled development do not only result to physical “ugliness,” but it has a negative effect on the quality of life as well.

“When the development of an area is uncontrolled, there will be a problem on the resources since its allocation was not properly planned. The available resources cannot keep up with the rate of development,” Mercado explained. “This setup disables LGUs to provide the necessary social and economic services such as health, education, housing, transportation, and functional drainage systems. Without these basic services, quality of life declines—with a greater effect on the poor families.”

Poor planning also affects the disaster resiliency of an area.

“Looking at the photo, it is very hard to imagine how the people residing in that area can save themselves when disaster such as ‘The Big One’ strikes,” stated Anthony Marzan, convenor of CLUP Now! “The area is very congested. There’s no wide open area where people can run to and stay if there’s an earthquake.”

CLUP Now! pointed out that the passage of the NLUA is a long-term solution to such. “It might be a little late for highly urbanized cities such as Pasig, but we still have a vast range of land resources to save outside the metro,” added Marzan. “We do not want our whole country to be as congested and chaotic as what is seen in the photo. We need to pass the NLUA while we still have time to save our remaining land resources from inappropriate uses.”

Despite the President’s certification of the NLUA as an urgent bill, it still remains pending in the 16th Congress. The Senate Committee on Environment and Natural Resources is yet to release the consolidated report.