The Homemaker is a Human Rights Defender 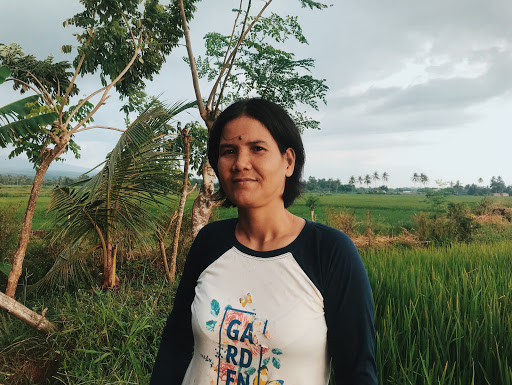 I was a housewife and didn't know anything about agrarian reform or land rights. Later on, I got involved when my parents passed away. They were not ARBs but they were actual tillers of this rice land, so we were eyeing for Inclusion. I became their representative if there are meetings or dialogues.

KAISAHAN was no longer operating in Ormoc when they passed away, but I knew about the organization because of their previous engagement in Valencia. I approached Calay, one of the members of the Valencia Small Farmers Association (VASFA), and asked  her to inform me if ever KAISAHAN comes back in Ormoc. Little did I know, KAISAHAN just started a new project in Leyte. Calay convinced me to be a member of VASFA, and I agreed because I realized that it would be better to have a support group when dealing with land rights.

I was lucky enough to participate in trainings, and I really liked it even though I know I cannot absorb everything at once because all of these are new to me. What I have in mind is that at least I know the basics.

If I didn't become a member of VASFA, I wouldn't benefit from the support services offered by KAISAHAN. I wouldn't know about human rights. Now that I am considered a paralegal, I extend my assistance, not just to VASFA, but also to other farmers whose rights are being violated. I share with them the things I learned from the training. I told them, "if you stayed silent and scared, nothing will happen. Your situations won't change."

Without the trainings, I might have been easily discouraged. The trainings helped me understand my rights, so my mindset now is: I would quit if I'm in the wrong, but as long as I have documents that will prove that what I am doing is legal, I will not stop.

It was really a big change from what I was before being involved in land rights.

I was really contented before. I was just at home, and didn't care about agrarian reform. My parents did, but I really didn't involve myself before. Now, I've met a lot of people. I've met other farmers during trainings, and learned a lot from their experiences. I believe they learned a lot from VASFA's experiences, too.

Because of my active involvement, I later on became the secretary of the Ormoc-Kananga Leyte Farmers Federation (ORKALEFF). We serve as a support group to other farmers and association that are facing issues. We stand with them during installations and dialogues. I was really happy to see a united group of farmers in Ormoc and Kananga. It was really fulfilling most especially if you see that the lands are already productive.

Now, I have hands-on experience in the farms. Nong Pablo, one of the ARBs in Sumangga, taught me how to plant sweet potatoes. It's become an extra source of income for me.

My attention now is on agriculture. It was really a good experience because instead of me buying food, now people buy food from me. It helped my family with the finances. My husband receives his salary every 15th and 30th of the month, and sometimes, before the 15th comes, we were already short of cash so we have to borrow money. Now that our farm is productive, we've already paid a huge part of our debt, and hopefully soon we will be debt-free. //