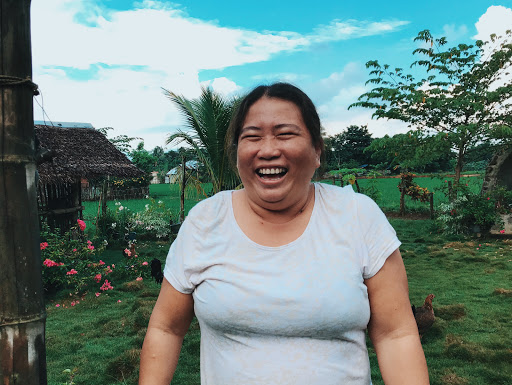 I was once a Promo Coordinator for Splash, the company that manufactures skin products. After I gave birth to my second child, I resigned from this job and stayed at home to focus on my children. We also have a small garden at home. That's the only thing I knew about farming or agriculture.

When the Sabang Bao, Labrador, and San Jose Farmers Association (SALASAFA) needed a Finance Officer for a small grant project linked to them by KAISAHAN. They asked me to do the job for them. I asked, "why me? I'm not an ARB. I'm not even related to any ARB." My neighbor, Celso Villas, encouraged me to do the job for them since most of the members have little knowledge of accounting. I agreed later on so I could help the farmers, and became a full-fledged member of SALASAFA. Later on, I became the association's secretary.

I was able to attend various paralegal and human rights defender training. I didn't know the things tackled in those training before. Now, I became more aware of the issues being faced by the farmers. I got really involved and became the resident paralegal of SALASAFA. I am very hands-on with the cases where SALASAFA is involved. I follow-up with DAR. I do case documentation. I also prepare proposals for support services.

Although I never imagined that I will be doing this ever, I did not regret being involved with SALASAFA. Yes, I did get really scared before. This vocation is quite scary because the landlords are unpredictable. But now, I got used to it.

Even though I'm not being paid for doing this, I am happy that I can help the farmers with their issues. I've been seeing them having their CLOAs for more than a decade and witnessed how their rights are being violated. I really wanted to help them, and I just cannot leave them most especially that they are not yet installed. What will happen to them if I leave? I still can do more for them.

I know there are NGOs that are assisting the farmer organizations, but NGOs are here temporarily. I live here and I am just here all the time. When someone needed help, they can easily find me. //