Role of Media in the CARPER Campaign 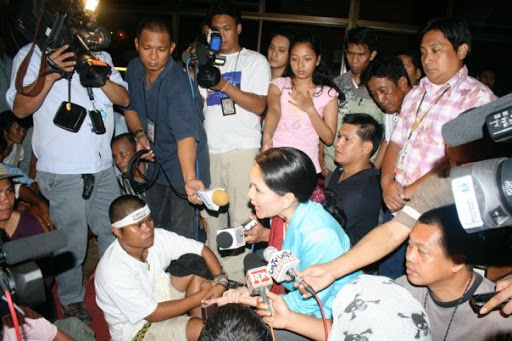 THE ROLE OF MEDIA IN THE CARPER CAMPAIGN: OF MEDIA BITES, SNAPSHOTS AND SPREAD OF STORIES

Three years of intense campaigning for the CARP Extension with Reforms (CARPER) Law paved the way for local and international media to place the controversial legislation in the public consciousness. This historic campaign united farmers, agrarian reform advocates, students, church personalities, laborers, and other sectors pushing for CARPER.  The intense campaign for CARPER called for equally intense media coverage to realize the farmers’ triumph for land ownership and social justice.  But getting media coverage for the campaign was not always easy, and there were always concerns like whether the message was communicated correctly, if the provisions of the law that confused other groups were sufficiently explained, and whether the issue was discussed extensively. Despite media coverage, there is always room for clarification. But then again it is said that bad coverage is better than no coverage at all.

Even at the onset of the CARPER campaign it enjoyed much media coverage.  The march of the Sumilao, Banasi and Calatagan farmers to Manila and the hunger strike by farmers and religious leaders at the gates of the House of Representatives all made history.

However, despite the significance of the achievements by the farmers, these did not always land in the mainstream media. There was a stage in the CARPER campaign when it was difficult to understand why, despite the issue’s urgency and relevance, it was not getting enough media coverage. It became apparent that the farmers’ actions had to go beyond the ordinary to become “newsworthy” in the eyes of the media. Ultimately it was the farmers’ extreme sacrifices which landed the campaign in mainstream tri-media.

Who can forget the sight of farmers drenched in rain? Or a Catholic Bishop and church personalities being water cannoned by police and firemen?  The farmers, fearless and hopeless with the disappointing act of the Congress. went on sit-down strike and laid siege to the House of Representatives not once but three times. These actions enticed media to cover the land reform campaign.

The CARPER campaign, no matter how urgent and relevant, still competed with thousands of other social issues. At the time of the campaign, it was the issue of charter change or amendment of the Philippine Constitution that occupied the media’s attention.  Charter change bombarded the media despite less creative and less active mass movements as compared to the CARPER campaign.  This indicated that CARPER was not considered a national issue which should have been treated equally if not with more importance than the changing of the Philippine Constitution.

In the course of the campaign, hundreds of farmers left their families behind in the provinces and trekked toManila. This action won some media mileage. The media are centered mainly inManila.  Thus, local struggles had to be brought toManilato gain greater media coverage.

Another challenge was the anti-CARPER group’s defiance of the farmers’ initiative.  The issue of land reform is highly political and economic, and he who has these powers also has the power to influence media reports.

The individual biases and perceptions of editors and publishers also shape the media’s perspective on CARPER.  Additionally, reporters who cover the land reform beat also cover the entire agriculture sector, spanning the concerns of big industries and the peasant class. All these compete with CARPER for media attention.  Sometimes the easiest coverage is the spot news wherein the media covers the day’s activities, especially for photo journalists who are always on the look-out for visual gimmickry.

What captured the media’s attention, apart from the campaign’s relevance, timeliness and urgency, was its entertainment value.  In this era of infotainment, where getting information should be appealingly structured, the campaign’s entertainment value came to the fore as well.  From a photo journalist’s point of view, photographs on CARP are striking because they “symbolize poverty” and can immediately tell a story that appeals to the readers’ emotions and provides inspiration to advocates. Stories on CARP are attention-catchers for readers, listeners or televiewers.  Compared to issues on violence, politics, tragedies, and show business, CARP is a complete story in itself.  It covers violence (land-related, land-owner harassment), politics (landlord-dominated policy makers), tragedies, while the politicians or government officials provide the entertainment factor.  When in front of the camera or being interviewed by the media, politicians and government officials behave like actors as they try to get media mileage.

The issues of farmers and land reform also have a very personal appeal to many Filipinos.  A majority of the Filipino population is engaged in farming. Thus, some media personalities took the issue as a personal engagement as they themselves had similar experiences as the campaigning farmers, they belong to a farming family.  Despite the prevalence of “envelopmental journalism”, where media coverage can be bought, a majority of the media workers believed in the heart of the campaign, that is, social justice and equitable distribution of lands.  The media also believed that the Philippines is a predominantly agricultural country and that production need not come only from the commercial sector but also from the small producers.

Information and communication technology as a media tool

Aside from television, radio, and print media, the farmers maximized the internet through social networking sites such as Multiply, Friendster, Facebook with Cause applications where one can create his/her own Cause and recruit members/supporters who share the same advocacy.  Yoyong Merida, a Sumilao farmer, had mastered the use of Facebook with his network expanding from students, media, politicians, celebrities, agrarian-reform advocates and church leaders. Yoyong maximized Facebook as a tool to maintain and expand contacts, keep up with political and media events, and shout out positions when provided no space in the mainstream media.

Social networking sites also provide their users the liberty to share their thoughts, announce activities and expand their network of supporters. These sites are accessible to and frequented by almost all generations of internet users.  Whatever their intentions, people have their own accounts that they want others to know, and access to the internet is available anytime almost anywhere in Metro Manila.

Lessons Learned: The power of media in CARPER’s passage

If there is one lesson worth remembering from the CARPER campaign it is that advocacies, no matter how relevant and urgent, need media to hasten the process of getting things done. The travails of the campaign made CARP newsworthy and these should be documented as a guide on how policy in the country can be shaped in favor of the marginalized sectors.

The campaign enjoyed frequent coverage on television, radio, and print media.  The media provided good venues for different perspectives to flourish into healthy debates in perfecting the imperfect old law.  The media coverage gave the public a blow by blow account of what was happening with CARPER.  Media also helped shape the government’s position to later side with the farmers. With the different faces of CARPER having been caught on camera and print, supporters elevated CARPER from a sectoral or local concern to national issue.

The CARPER coverage also exposed how the landowner-dominated House of Representatives sashayed around the law. Some Representatives could not hide their personal agenda to exclude their properties from land reform. It has been 21 years since the effectivity of the first law on CARP, yet there remains a considerable number of landless farmers. Landlords and politicians have succeeded in legally maneuvering around the very law that is supposed to uphold the farmers’ rights.

The CARPER coverage also intended to inform the people on how the government put capitalist interests ahead of farmers’ rights and food security. Being an agricultural country without food security, continuous exposure to the media can help develop the agrarian sector because the supporting public relies on media to tell the story.

RA 9700 was signed in August 2009, thanks to the farmers’ blood and sweat in campaigning for their cause and the influence of the media.