Rights and Environmental Defenders challenge PNoy, Congress, and Senate to be 'green' 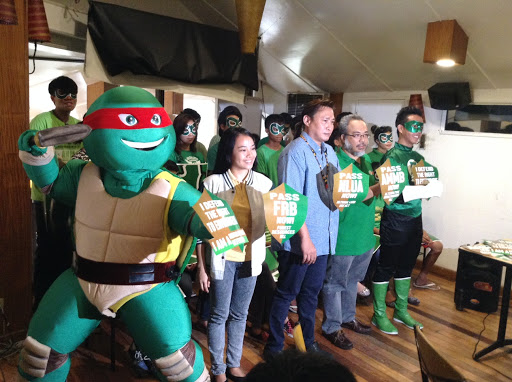 In celebration of the World Environment Day 2015, human rights and environmental defenders launch a campaign that tells the public and the government that “It’s Never Hard to be Green.”

Green defenders led by SOS Yamang Bayan Network (SOS YB), Campaign for Land Use Policy Now (CLUP Now!), Forest Resources Bill Network (FRB) and Youth for Rights (Y4R) are behind the campaign in push for the enactment of three green or environmental bills pending in the 16th Congress.

“The campaign seeks to enlist the support of the youth. It proposes an innovative approach through the appropriation of “COSPLAY” into CAUSEPLAY to highlight the seriousness of the issue packaged in a popular form.” Explained Y4R spokesperson Danica Duno.

According to the group, the campaign will inform and inspire the public about the international standards set by the United Nation Environment Program, that safe, balanced and healthy environment is essential to the realization of human rights not only of the present but of the future generation.

Rep. Teddy Brawner Baguilat Jr, one of the main sponsors of the three bills—Alternative Minerals Management Bill (AMMB), Forest Resources Bill (FRB) and the National Land Use Act (NLUA)—emphasized the importance of the three bills in addressing the environmental concerns in the country. He said: “The three bills is a call for fundamental change – in mindset, in behavior, in our whole lifestyle—and it is timely that we remind ourselves our roles as mere stewards of the earth on World Environment Day.”

Meanwhile, the groups also see the campaign as a final push to pass the triad bills as the 2016 elections is approaching.

“By October, the filing of candidacies will be concluded and the informal campaign period will begin.  Practically, we have six months to renew the push for the three green bills. We have to work harder on the campaign, or the passage of these bills will again be delayed, and be overtaken by the national and local campaigns of the electoral candidates,” said Kimberly Alvarez of KAISAHAN, the secretariat of the CLUP Now!

One of PNoy’s priority bills, the NLUA is yet to be passed. The attempt to put in place a national land use policy began since the 9th Congress.

Akbayan Rep. Ibarra “Barry” Gutierrez, also a champion of the green bills concluded: “The three green bills are inextricably intertwined. All seek to protect and regulate the use of our natural resources against the onslaught of corporate greed and the drive for gargantuan profits.”

Aiming to place once again national attention to the three pending green bills the campaign is to culminate on the annual GREEN MARCH to be held days before the State of the Nation Address (SONA) of PNoy on July 27.