Land use bill supporters to SP Drilon: Make NLUA a Legacy Bill of the 16th Congress 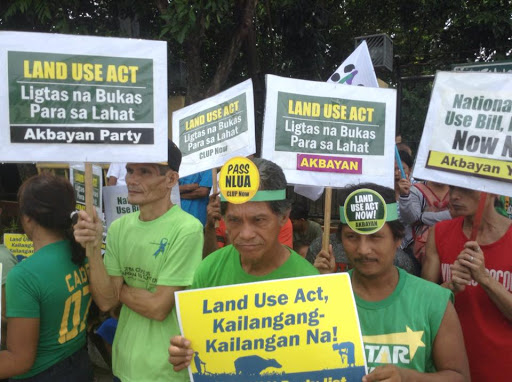 “The crushing fate of the NLUA during the 15th Congress should never happen again!”

This was the strong statement of supporters of the National Land Use Act who amassed at the Senate today as Senator Juan Ponce Enrile makes a come-back.

The Campaign for a National Land Use Policy Now! demanded from Senate President Franklin Drilon to pass NLUA as among this administration’s legacy bills and avoid repeating his predecessor’s move to block the bill’s passage last Congress. Senator Enrile was president of the Upper House in the 15th Congress, which remanded the NLUA back to second reading.

“At the end of the 15th Congress, Sen. Enrile had a last-minute request for extra time to review the bill. However, he, along with Senators Marcos and Villar, never submitted their proposed amendments, resulting in the non-passage of the bill. As we near the end of the 16th Congress, we urgently appeal for Senator Drilon to fulfill the Senate’s priority legislation, and be committed to work on NLUA’s immediate passage,” stressed Anthony Marzan, convenor of CLUP Now!.

Marzan said Senator Drilon included NLUA in a recent list of bills that must be passed this 16th Congress.

“We are positive that with the Drilon’s leadership, the NLUA bill will not be neglected like what happened in the previous Congress. We remain optimistic that this new list will speed up the processes in the Senate and have the bill passed within the year, just before the full-blown election hype,” affirmed Marzan.

“This is also a crucial time for the NLUA with the shuffling of chairmanship of the Environment Committee that houses the NLUA from Sen. Loren Legarda to Sen. Chiz Escudero. We are confident that Sen. Escudero fully understands the implications and urgency of the NLUA, and this major change in the committee’s leadership will not hinder the passage of the bill,” added Marzan.

“We already passed our version in the House of Representatives last June 2014. Congress needs to act urgently to deliberate on the NLUA bill which is a concrete response to climate change adaptation and protection of our life-support systems,” said Dinagat Island Rep. Kaka Bag-ao, principal author of the NLUA in the Lower House.