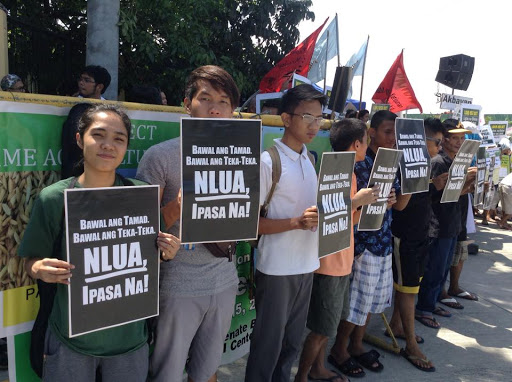 This is the strong statement of the supporters of the land use bill who amassed at the Senate today, September 29, calling on Senator Chiz Escudero to immediately release the committee report of the National Land Use Act (NLUA). The group used this mantra in reference to the statement of Escudero during his recent declaration of his candidacy for vice president: Bawal and tamad! Bawal ang teka-teka!

Ka Maning added that as the chairperson of the Senate committee that houses the NLUA, it is Escudero’s responsibility to act on its immediate release and circulation. Escudero was recently seated as the new chairperson of the Committee on the Environment and Natural Resources, replacing Senator Loren Legarda.

(“We should not postpone the release of the committee report, so that we could proceed to the third reading,” Ka Maning explained. “The house version of the bill was already passed last year, while there is a very little progress in its status in the Senate despite the NLUA being a priority bill.”)

Anthony Marzan, convenor of the Campaign for Land Use Policy Now! Network (CLUP Now!), meanwhile expressed his concern about the NLUA being disregarded once the election hype begins.

“This is a crucial time for the NLUA with the nearing election campaign period and the shuffling of chairmanship of the Environment Committee,” stated Marzan. “However, we are confident that Sen. Escudero fully understands the implications and urgency of the NLUA, and these factors will not hinder the passage of the bill.”

The group reminded the legislators about the urgency of the land use bill.

(It’s the 6th anniversary of Typhoon Ondoy which ravaged Metro Manila. The NLUA has been pending for more than 20 years. Why is it still unpassed?” asked Jessie Dimaisip of AKBAYAN. “It’s already 2015! A lot of disasters could have been avoided if the NLUA was enacted long ago. It is saddening to know that such an important bill is not being given enough attention.”)