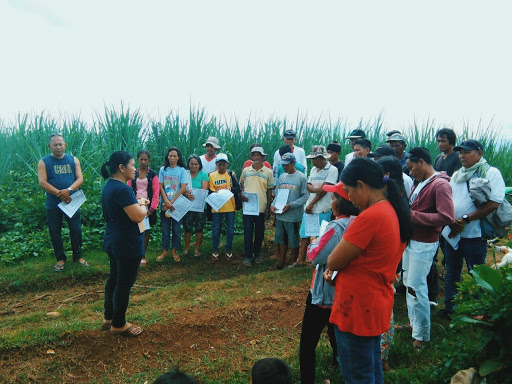 Another 20-hectare of the said landholding was earlier released to 22 CLOA holders in 2017.

The CLOAs were supposed to be distributed in 2016, however, due to the existing crops in the area planted by Civil Law Lessee (ariendador), the installation of the farmers was postponed.

A notice to stop cultivation was sent to the ariendador last 2016 but he continued to cultivate the area, stating that he will only stop if the CLOAs are released to the farmers.

"Some ARBs decided to enter the ariendo system (illegal leasing of land) as early as the release of the ARB master list," explained Jared Lagahit, LTI Officer of KAISAHAN, an NGO assisting the ARBs. "So long before the ARBs receive their titles, the tenants have already been cultivating these lands. As a result, the CLOA distribution and installation were delayed because DAR had to resolve a number of ariendo-related issues first. And this is a major problem for DAR all over Negros Occidental."

The installation of the farmers was then moved to 2017 as part of the agreement between the lessee and the Department, allowing the former to harvest the existing crops before finally vacating the areas.

Herminia Alejandrino, paralegal and board member of the Hacienda Saint Raymond Farmworkers Association (HASRAFA), admits that the association needs intervention when it comes to organizational strengthening.

("The problem started when the members of HASRAFA became inactive and started to work on their lands individually," share Alejandrino. "Some were not able to sustain the land alone, without support, so they ended up entering the prenda (mortgage) and ariendo systems. The management of our lands is not collective, and we have individual CLOAs. That is why we wanted to revive HASRAFA so that we could get support services.")

Alejandrino reported that they were misinformed and thought that an organization is only a prerequisite for availing land under CARP, and not as a necessary step for availing support services.

"We have to remind them that the purpose of having an organization is for them to be qualified for support services provided by the government," Lagahit explained. "The former DAR staff who organized them failed to make this clear. Some members became inactive and managed the land individually. They were not able to individually avail support services, and this eventually resulted to their failure in sustaining the land."

KAISAHAN, in partnership with the Program Beneficiaries Development Division (PBDD) of DAR, is now scheduling a series of organizational development planning and other capacity building training sessions with HASRAFA to assist them in availing support services and ensure the sustainability of their sugarcane land.

("We will end up having nothing if we work individually," Alejandrino added. "A strong organization is important so that our lands will not end up in the hands of ariendadors and former land owners.) //