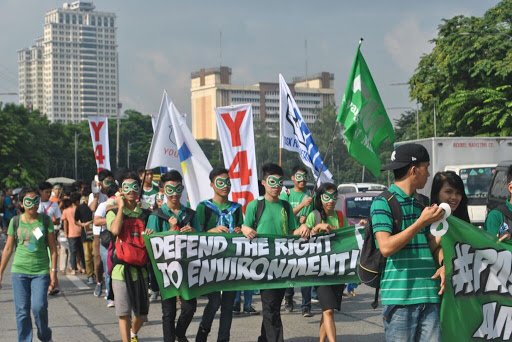 The ‘green’ advocates demanded President Aquino to include the three pro-environment bills in his SONA this coming July 27, and urge the legislators to pass the three bills as a legacy of the 16th Congress to future generations.

“We are disappointed with the slow progress of the green bills in both the Senate and House of Representatives,” stated Akbayan Rep. Angie Katoh. "We badly need to inform the public and the government of the relevance of these green bills, in light of the recent disasters and predicted dangers caused by natural calamities. We must not forget that environmental concerns are critical issues that affect the nation.”

“Currently, there are many other issues that creates more noise than the green bills, such as the Bangsamoro Basic Law, the Binays, and of course, the 2016 elections. The Congress should not neglect its responsibility to ensure a more sustainable and disaster-resilient environment through the passage of these bills,” explained Ifugao Rep. Teddy Baguilat, co-author of the three green bills.

Baguilat also pointed out that the green bills are generally focused on the proper use and allocation of the natural resources. “The green bills actually benefit everyone. It is not biased to any sector, since its main concern is the safety, security, and welfare of the people—rich and poor, big or small. This, I think, is the main message that we wanted to communicate through this Green Fest.”

The Green Fest showcased the impact of these green bills to the society through various activities targeting the youth. This include a Forest Food Fair, featuring food products from forest resources; quiz contests; and art exhibitions.

To liven up the march, an environment-themed “Causeplay” was also held. It is basically a cosplaying event wherein participants dressed up as super heroes to represent the idea that the people are the saviors of the environment.

Another highlight of the festival was the musical performances of pop-advocate Noel Cabangon, and the ethnic group Kontra Gapi. Cabangon, who wrote and performed the song “Dapat Nang Ipasa (Awit sa Tamang Paggamit ng Lupa),” also led the launch of  the NLUA music video. The song is the official campaign jingle of the land use campaign.

Despite all the efforts given in the different campaigns, the green bills remained unpassed. The Green March and Festival is the highlight of the nationwide campaign, “It’s Never Hard to be Green,” launched last June as a final blow to push for the passage of the ‘green bills’ before the 16th Congress comes to a close. It was then decided to combine these efforts to come up with a stronger and bigger campaign.

The three green bills are in different status in the 16th Congress.

The NLUA, a 22-year old bill declared as a priority bill by the President, was already passed in the House of Representatives, and is currently pending in the Senate.

“We are still waiting for the Senate Committee on the Environment and Natural Resources to release the report. Hopefully, it would be released soon before everyone gets distracted by and busy with the election related campaigns,” stated Mr. Anthony Marzan, convenor of the CLUP Now! (Campaign for Land Use Policy Now!) network. “We are worried that the election hype will further delay the passage of this priority bill. We could not let that happen since we have come this far!”

“Let us all be reminded how important this bill (NLUA) is. The Philippines is the only country in Southeast Asia that doesn’t have a comprehensive land use law. Yet, the country is in bad need of a law that manages and allocates our natural resources to its proper uses, since we are very vulnerable to disasters,” added Marzan. “The NLUA is the key to the country’s effective disaster risk reduction management. It is the long-term solution for all these problems caused by natural calamities.”

Meanwhile, the FRB remains pending in both houses.

"The Forest Resources Bill is a bill long overdue,” stated Ms. Maria Belinda dela Paz, chief operating officer of Haribon Foundation. “Our natural forests have declined from 80% in early 1900's to 24% in 2003 and unfortunately, 91 million of us depend upon its intangible resources. We simply cannot survive if we continue damaging our environment and not replenishing the trees that have been cut. Let’s protect our forests so that our biodiversity will flourish and future generations will survive. Let us be the voice for our forests and biodiversity.”

Supporters of the AMMB were also having a difficult time in pushing for the bill in both houses.

“Looking at what AMMB can offer, it is really quite a surprise that this bill is facing strife when clearly, it is a hope for a sustainable future, not just for the environment but for the Filipino people.” said Jaybee Garganera, National Coordinator of national anti-mining coalition Alyansa Tigil Mina, he added that “AMMB is our concrete proposal for responsible mining.”

“It is not a secret that the Philippines is one of the blessed nations when it comes to mineral resources and currently, the law governing our mining operations in the country has not proven its efficiency in properly utilizing and developing our mineral resources. In fact, according to MGB latest data as of July 2014, the mining industry has only contributed a total of 0.7 percent in the country’s Gross Domestic Product (GDP), a few loose change that will never be worth the destruction mining has brought our country.” said Garganera.

“Clearly, these bills have different focus but they are all anchored in one agenda: protecting the environment and its inhabitants,” explained Egay Cabalitan of SOS-YB. “We are very positive that the value of these bills will be appreciated through this event.”