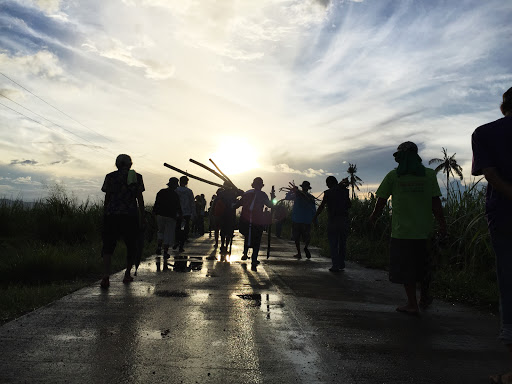 20 years of waiting, still not over for Ormoc landless farmers

Ormoc City – Around 30 agrarian reform beneficiaries from Brgy. Valencia and Brgy. Sumanga, Ormoc, Leyte were once again deprived of their rights to own the lands they till when the Department of Agrarian Reform yet again announced on February 9, the postponement of their scheduled land installations (February 9 for Valencia and February 10 for Sumanga). DAR recalled its own writ of installation allegedly due to a filed case of cancellation of CLOAs (Certificate of Land Ownership and Acquisition) over the land by other farmers.

In both Orders sent in by PARPO II Renato Badilla, it was stated that the previous landowners, both Tan Landholdings and the Potenciano & Anecita Larrazabal Enterprises Corporation (PALEC), opposed the installations in the 30 and 35 hectares of lands respectively.

The said landowners, as the Orders state, are "the petitioners of a case for cancellation of the CLOAs (of the 30 farmers from both barangay) pending at the DARAB based on the alleged erroneous coverage of the subject landholding." An affidavit of third party claim was attached to both orders.

The Orders further state, "Per verification, such ground for cancellation is so serious such that there can be no certainty that the office will be installing a correct farmer beneficiary, as said issue is determinative of whether the subject landholding has been correctly covered or not… The office finds it sound to resolve first said issue so as to avoid bigger problem."

KAISAHAN, an agrarian reform advocacy organization that has been helping ARBs since 1990, expressed their frustration at the non-installation. Upon receiving the orders from DAR, Atty. Claire Demaisip of KAISAHAN yesterday said, "The installation should not be cancelled even if there is an existing case."

She pointed out that the existing rules states that "EXCEPT FOR THE SUPREME COURT, no court in the Philippines shall have jurisdiction to issue any restraining order or writ of preliminary injunction against the PARC, the DAR, or any of its duly authorized or designated agencies in any case, dispute or controversy arising from, necessary to, or in connection with the application, implementation, enforcement, or interpretation of (the AR laws)."

“In addition the titles of the farmers have become indefeasible after 16 long years of being CLOA holders,” informed Demaisip.

Leyte Sheriff Joseph Catingub, recently received a letter from the lawyers of both Tan and Larrazabal landholdings, reminding him about the said cancellation case and insisting that the scheduled installations should be postponed. This later on resulted to the issuance of the orders from PARPO Badilla.

In a meeting that followed the release of the Orders, the farmer beneficiaries wielded their CLOAs before DAR representatives, Atty. Kenilma Pen, and MARO Perpetua Sabaldan with Sheriff Catingub and expressed their fury over the DAR's decision.

The farmers demanded the immediate resolution of this case and their installation.

However, Pen and Catingub said that as much as they wanted to install the farmers, they are not in the position to resolve the issue.

Meanwhile, a few meters away from the home of Silva were tents of mobilized farm workers to guard the installation areas. According to reports, these workers started pitching their tents last Sunday.

As of today, the Sumanga farmers allegedly received threats that the Larrazabals plan to evict them from their houses which are still located inside their former landowner’s area. Not being able to farm their awarded lands, they ironically remain as farmworkers of PALEC to provide for their families.

The said farmer beneficiaries from Valencia and Sumanga have already had several attempts for installation since they received their CLOAs way back in 1996. However, all these attempts failed due to resistance of the previous landowners.