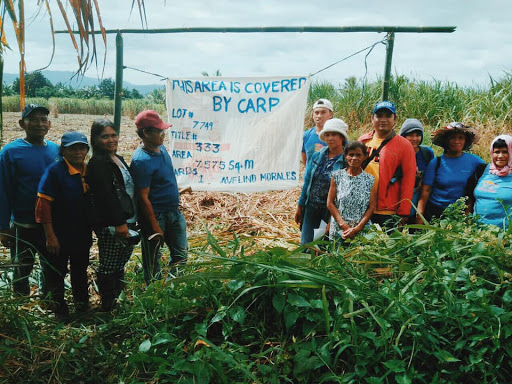 Eleven (11) agrarian reform beneficiaries (ARBs) started cultivating a 13-hectare land during a peaceful installation activity led by the Department of Agrarian Reform (DAR) last January 25, 2019 in Barangay Juaton, Ormoc City. The beneficiaries received their Certificates of Land Ownership Award (CLOA) in 1998. However, resistance from the previous landowner delayed the process. The property was part of the Serafica landholdings.

However, some of the beneficiaries expressed their fear of possible landowner resistance.

("The children of the former landowner are furious about us getting the land," stated Elizabeth Belarmino, one of the beneficiaries. "Our land was supposed to be part of the land that they will inherit.")

Belarmino added that the former landowner, through one of their employees, had once threatened to fire the beneficiaries from their farmworker jobs in the Serafica landholdings.

("It is good that the installation was peaceful. There are still sugarcane crops planted in some parts of the area by the Seraficas waiting to be harvested. We hope that the former landowners will be able to move on and just let us peacefully till our lands, once these sugarcanes are harvested.")

According to MARPO Perpetua Sabaldan, OIC for Installation, DAR will be closely monitoring the area until the existing sugarcanes are harvested. Once the crops are harvested, the ARBs--all members of the Juaton Farmers Association (JUFA)--will follow their farm plan and will start cultivating corn, banana, coconut, root crops, and vegetables.

JUFA has previously received support services from DAR during the 2005 installation of some of its members. //