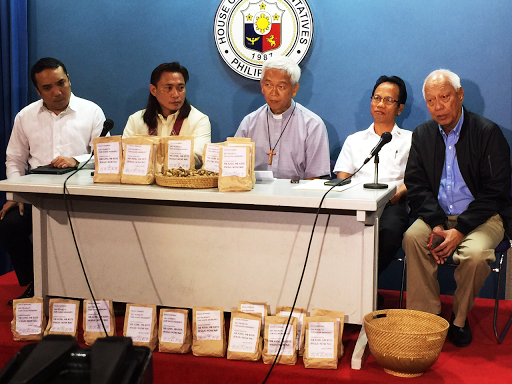 "While I understand that the Bangsamoro Basic Law holds ascendancy over all other bills at this time, I trust the House leadership will immediately schedule House Bill 4296 in plenary and follow President Noynoy Aquino’s directive last March to complete the agrarian reform program.”

This was the urgent message conveyed by Ifugao RepresentativeTeddy Brawner Baguilat, chair of the House Committee on Agrarian Reform, in a press conference with other co-authors and agrarian reform advocates.

HB 4296 seeks to continue the issuance of Notices of Coverage over land covered by the Comprehensive Agrarian Reform Program. Majority of remaining lands are in Negros Occidental, Negros Oriental, Eastern Samar, Leyte, Basilan, Iloilo, Capiz, Tawi-tawi, Surigao, among others.

“It’s been two months after House Majority Floor Leader Neptali Gonzales II said that HB 4296 will be tackled in plenary once Congress resumes this May. The Department of Agrarian Reform already submitted its updates on the balance of lands without NOCs. We hope the Bill will also be scheduled and passed in plenary together with the BBL,” expressed Baguilat.

Auxillary Bishop of Manila Broderick Pabillo of the Catholic Bishops Conference of the Philippines joined Baguilat in asserting the urgency of the bill’s passage to complete CARP implementation and fulfill the Constitutional mandate to distribute all agricultural lands to landless farmers.

“In this Year of the Poor, members of Congress and the executive branch, should ensure that social justice measures like CARP are fully and effectively implemented to improve the lives of our poor farmers,” stressed Bp. Pabillo. Bishop Pabillo also co-convenes SULONG CARPer, a broad formation of agrarian reform advocates from farmers’ organizations, NGOs, church-based groups, and other civil society organizations.

Rep. Bag-ao pointed out that she and Rep. Lennie Gerona-Robredo filed HB 4375 to create an independent Agrarian Reform Commission to review the actual accomplishment of CARP and investigate circumventions and violations of the CARP Law with a view to cause the affected landholdings to be redistributed to qualified beneficiaries.

SULONG CARPer co-convenor Atty. Christian Monsod emphasized that both bills need to be passed for agrarian reform to succeed. “Congress should address both the social justice concern through asset reform and the circumventions in the implementation of CARP, which hindered its swift and efficient completion,” said Monsod.

After the press conference, agrarian reform organizations offered bags of peanuts to the leaders and members of the House of Representatives to help them remember their promises and obligations to fulfill agrarian reform. The groups said that peanuts are a rich source of niacin which can help lawmakers stay mentally-alert and healthy to immediately pass these two bills by June.

Meanwhile, different farmers’ organizations, NGOs, church and school based groups will launch a series of mass actions to call for the urgent passage of HB 4296 and HB 4375. On May 15, 5,000 farmers and advocates for agrarian reform led by Task Force Mapalad will hold a concelebrated mass in Bacolod City. From May 25 to June 10, farmers from various provinces will troop to Metro Manila to stage a “Martsang Bayan” around the metropolis until these urgent bills are passed in plenary before Congress adjourns sine die.