The CARPER Story of Sumilao, Banasi, and Calatagan Farmers 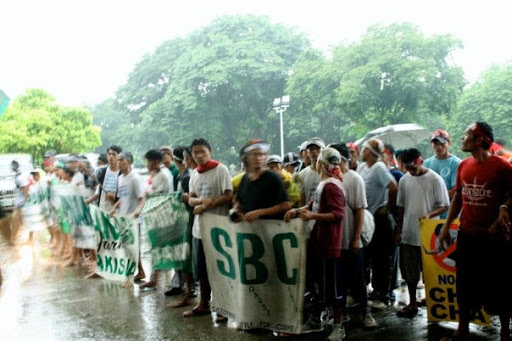 August 7, 2009, the signing into law of Republic Act No. 9700, or the CARP Extension with Reforms (CARPER), is a victorious moment for the Sumilao, Banasi and Calatagan (SBC) farmers, as well as the farmers’ organizations and institutions of Reform CARP Movement (RCM) and the Rural Poor Solidarity (RPS). It was a victory as well for all the support groups, mainly the Catholic Church, academic institutions and their students who determinedly pushed for the passage of CARPER. Without their help, CARPER would not have become law.

CARPER gives hope to millions of landless farmers still hoping to benefit from the agrarian reform program. It gives opportunities to agrarian reform beneficiaries (ARBs) to make their lands productive by providing socialized agricultural credit and initial capitalization. CARPER also enhances the security of tenure of millions of ARBs through its reform provisions such as the indefeasibility of Emancipation Patents (EP) and Certificates of Land Ownership Award (CLOA). CARPER likewise reinforces landless farmers’ rights to own and control the land they till and strengthens their legal standing on agrarian related disputes.

But CARPER was not handed to farmers on a silver platter. Rather it was the fruit of years of creative and pro-active campaigns.

On October 10, 2007, 55 farmers from Brgy San Vicente, Sumilao, Bukidnon left their homes for a perilous march toManila.  It was a journey of approximately 1,700 kilometers estimated to take 60 days on foot.  The Sumilao farmers set out on this arduous campaign to reclaim the 144-hectare land that used to be their ancestral domain. They also pushed for the passage of CARPER and the National Land Use Act (NLUA).

A deep sense of solidarity from fellow peasants and the Church pervaded the march.  Everyday, the farmers were accommodated, fed, given medical treatment, listened to, and prayed for by bishops, priests, religious, and the faithful at every diocese and parish where the farmers passed by.

They eventually won the land from San Miguel Foods Inc., but four of their other calls, including the passage of CARPER and NLUA, were not yet acted upon by Congress. And so they vowed to continue the fight for CARPER and be part of the broad coalition for the passage of the law.

On April 21, 2008, the ARBs from Baha and Talibayog in Calatagan, embarked on a journey on foot from their homes to the seat of power in Metro Manila to make their voices heard. The government that gave them hope through agrarian reform had betrayed them and they were making this sacrifice to magnify the injustices committed against them.

Their 300-kilometer walk from Calatagan sought to bare the injustices being committed against the farmers of Calatagan in favor of the mining interests of Asturias Industries. Through this walk, the Calatagan farmers called for the revocation of the Mineral Production Share Agreement (MPSA) issued by the DENR to Asturias Industries. Their march asserted their rights as owner-cultivators of the land.

Aside from the immediate resolution of their case, they also pushed for the passage of CARPER to address the loopholes of CARP.

On November 17, 2008, 45 farmers from the Banasi Agrarian Reform Farmer Beneficiary Association (BARFBA) started a 444-kilometer walk to Malacanang from Sitio Banasi, Brgy. Pawil, Bula, Camarines Sur to demand that President Gloria Macapagal Arroyo give them back their land and that the CARPER bill be immediately passed.

They marched to Malacanang to demand the reversal of the decision of the Office of the President ordering the Department of Agrarian Reform to cancel the CLOA covering 123 hectares awarded 11 years ago to 57 Banasi farmers, thus reverting the land to the previous landowners.

CARPER would have resulted in the substantial increase in funding for agrarian reform so that two milllion hectares of land would get awarded to 1.4 million farmers and ensure that land titles already given to farmers could not be cancelled anymore after one year, thus guaranteeing that the Banasi case would not happen again.

The march of the Sumilao, Banasi and Calatagan (SBC) farmers led to the idea of the three groups jointly pushing for the passage of CARPER.  They inspired other groups to start their own campaigns. Thus was launched the “Lupang Hinirang, Lupang Hinarang (LHLH): A Farmers’ Pilgrimage for CARPER” campaign.

The marching farmers exposed the state of agrarian reform implementation and brought the matter to the forefront of national concern.  CARP had reached its 20th  year of implementation on June 15, 2008, but Congress seemed indifferent to the calls of peasant groups to extend and reform CARP.  Even the call of the 79 Catholic Bishops for the immediate passage of CARPER was disregarded.  The only thing that Congress did was issue Joint Resolution No. 1, which removed Compulsory Acquisition (CA), the heart of agrarian reform.

LHLH aimed to contribute to the wider agrarian reform struggle to pressure Congress to pass CARPER before June 30, 2009.  The strategy was to raise the consciousness of the public so they would take concrete actions. Farmers would lead the cause by joining the pilgrimage for CARPER.

LHLH called for an urgent and coordinated response from peasant movements, agrarian reform advocates, the Church and civil society.  The Church, through the Catholic Bishops Conference of the Philippines (CBCP) had been very consistent in calling for legislation to extend and reform CARP.  Concrete proof of this is the hunger strike by Bishop Broderick Pabillo and other bishops .

The plan was for 50 Sumilao farmers and other farmers to launch a caravan from Bukidnon to Visayas, starting from the Banasi area in Bicol.  The Sumilao farmers would encourage the locals that they would pass through to join the pilgrimage.  It was expected that the number of pilgrims would grow after every diocesan forum. The group would also gather signatures in support of the immediate passage of CARPER. The core pilgrims were to be joined by the Banasi Farmers at Banasi, Bula, CamarinesSur.  They would also be joined by the Calatagan Farmers at Batangas.  The increasing number of pilgrims would continue their march to the House of Representatives inManilawhere they would converge with other farmers’ groups.

They reachedManilaon the first week of March 2009 and immediately joined the ongoing CARPER mobilizations. In one of the mobilizations, Sumilao, Banasi and Calatagan farmers including women farmers shaved their heads as a symbol of protest against the government’s failure to immediately pass CARPER.

They stayed inManiladespite Congress going on recess and the advent of the Holy Week.  Meanwhile, they gathered signatures for the passage of CARPER, lobbied for CARPER at the district level, conducted pressure efforts, developed strategy with Catholic bishops, diocesan priests, and religious, and attended the screenings of the documentary on farmers’ cases and CARPER entitled, “Lupang Hinarang.”

When Congress resumed session on April 13, SBC farmers and farmers from different organizations regularly conducted campaign and lobby work inside and outside Congress hoping that Congressmen would heed the call for the immediate passage of CARPER. But instead, the leadership of the House of Representatives responded with a threat of not passing or even resuming plenary debate on CARPER if the farmers would not stop their actions and alleged hostility on Congress.

The farmers and CARPER advocates were banned from entering the House of Representatives compound and were violently dispersed at the gates of the compound. Even Bishop Pabillo and other church people were not spared by the police’s water cannons.

SBC farmers and CARPER Advocates were never intimidated because they firmly believed in their cause, especially since Congress was perceived to be pro-landlord. That is why as part of the CARPER campaign, they held bold actions inside and outside the grounds of Congress, including the Congress stake-out, sit-down strikes,Jerichomarches, and the Congress Siege.

On June 1, 2009, two days before the end of the second regular session of Congress, the Senate passed Senate Bill 2666, the version of CARPER pending at the Senate. This boosted the morale of the CARPER advocates and raised their hope of that CARPER would be passed before the adjournment of the current congressional session. But their hopes were immediately dashed after the House of Representatives failed to resume the plenary debate on CARPER with no sign that it would pass the CARPER bill soon.

On June 2, one day before the adjournment of Congress, the farmers remained hopeful that the House of Representatives would prioritize CARPER. But the House not only failed to pass CARPER, they also passed a resolution on charter change thru constituent assembly which the farmers’ organizations, CARPER advocates and many Filipinos strongly opposed.

On June 3, the last day of the second regular session of Congress, also the last chance for Congress to pass CARPER before Joint Resolution No.1 expired. The advocates were getting helpless. Hope of passing CARPER was hanging by a thread. But the farmers were prepared for any eventualities and ready to do anything, even die for the passage of CARPER.

Since they were not allowed to enter the premises of the House of Representatives, SBC, Katarungan and  PAKISAMA farmers laid siege on Congress so they could convey their dismay over the lawmakers’ blatant inaction. The farmers were able to reach the outside lobby of the Plenary Hall. At that time, there was a caucus among all members of the House called by Speaker Prospero Nograles. The farmers were violently dispersed and 97 farmers and lawyers helping the farmers were arrested and detained inCampKaringalfor almost eight hours.

But eventually, the lawmakers blinked. The House of Representatives, with 211 affirmative votes, 11 negative votes and two abstentions passed HB 4077 before midnight of June 3.

While some individuals and groups had lost hope, the SBC farmers never gave up and believed that CARPER would be passed. Indeed, after years of massive campaigning with the help of individuals, lawmakers and groups especially the Catholic Church, farmers now have Republic Act No. 9700, a stronger and better agrarian reform law that, implemented properly and with strong political will, will complete  land acquisition and distribution in favor of farmers, with more productive farms within reach.