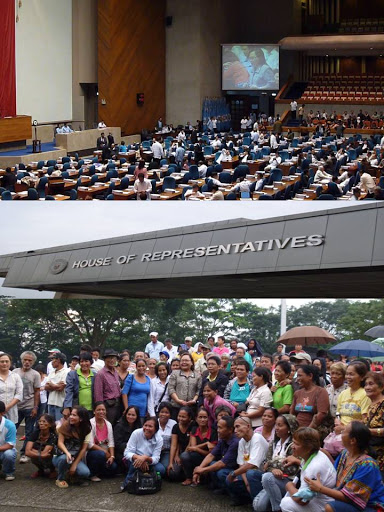 20 September 2012 marked the history for the House of Representatives as it finally approved House Bill (HB) 6545 or the National Land Use and Management Act (NLUA) and placed into the hands of Senate the duty to finally make this bill into a law.

Long drought is over

Around two hundred (200) supporters of HB 6545 gathered in the House of Representatives hoping that the NLUA bill, which has been pending for almost twenty (20) years, will finally be approved by the lower house.  HB 6545 seeks to institutionalize land use and physical planning as a mechanism for identifying, determining, and evaluating appropriate land use and allocation patterns in the country.  It provides for a clear delineation of land use categories -- Protection, Production, Settlement, and Infrastructure – that aims to ensure that the country’s lands and resources are protected and utilized in a manner that will be beneficial and sustainable for all sectors of society.

Composed of member NGOs of the Campaign for a National Land Use Now (CLUP Now!)  and POs from the peasant, fisheries, indigenous people and urban poor sectors, these land use advocates patiently waited as the long battle for the passage of the bill  comes to its conclusion. Finally, after waiting for almost three (3) hours, Deputy Speaker Arnulfo Fuentebella announced the passage of HB 6545 on the third reading. One hundred and ninety two (192) representatives voted for its approval.

"The National Land Use and Management Act will definitely help present and future generations of Filipinos to adapt climate change, the growing population and its demands for safe and secure housing, food and livelihood.  We need it more than ever and the 15th Congress must deliver this.  This is a crucial piece of legislation that the Congress must claim as its crowning achievement.”

The long drought for proper utilization of the country’s resources will finally come to an end.  Land use advocates, however, must be reminded that the battle is only half way through.  The attention of like-minded advocates in the Senate should be called for its passage in the upper house, and eventually its enactment into a national law.

The road to the finish line

Safeguarding the nation’s welfare is the mandate of our dear legislators. It is their duty to pass laws that will protect the lives and welfare of the present and future generations.  And passing  this bill is one such mechanism that must be employed.

Indeed, the people won when HB 6545 was approved by the lower house.  The victory, however, is not yet complete as we need to act and join together in calling our Senators to prioritize the passage of this bill.  We are near the end of the line.  We are uncertain how short or long our struggle will be, but one thing is for sure and that is the resulting reward will be priceless – better life for the Filipino people.