Advocates urge passage of NLU during The Forum 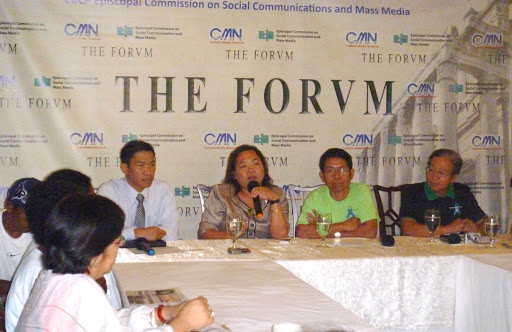 INTRAMUROS, MANILA – The need to institutionalize land use and physical planning as a mechanism for identifying, determining and evaluating appropriate land use and allocation patterns in the country was once again emphasized during a forum held in Manila last 13 November 2012.  Members of the House of Representatives (HOR) and civil society organizations (CSOs) attended “The Forum” and therein reiterated the necessity of passing the National Land Use and Management Act (NLUA) before the close of the 15th Congress.  “The Forum” is a weekly forum hosted by the Catholic Media Network and the Catholic Bishops’ Conference of the Philippines.

A Legislator’s Point of View

Rep. Kaka Bag-ao of the Akbayan Partylist, one of the principal authors of House Bill No. 6546 or the “National Land Use and Management Act”, requested Senate to give more attention to NLUA and prioritize its passage before the end of the 15th Congress.  As proficiently explained, having a national land use policy will promote and protect the right to life of every Filipino.  Not only will it address the livelihood concerns of many Filipinos, but it will also help minimize the adverse impact of natural calamities being experienced in the country.

Should NLUA be successfully passed and implemented, a standard on proper land use allocation and management will be created.  It will harmonize all existing laws on land use management, such as the NIPAS, IPRA, LGC, among others.  .

Its smooth passage, however, is not guaranteed.  There is a possibility that it will be opposed as it seeks to regulate the conversion of forest lands into mining areas and consequently prohibit extraction of minerals in protected areas.  As pointed out by Rep. Bag-ao, a damaged forest cannot be brought back to its original state.  Endemic tree species removed from forests cannot be replaced easily. “Kahit mag-reforest at re-planting ka pa, hindi na maibabalik ang mga original species na nawala sa forest lalo na kapag nag-extract ka ng minerals dyan sa forest na yan”, explained by Rep. Bag-ao.

Appeal from the CSO

Its immediate enactment is undeniably necessary.  Unfortunately, it has not been part of the government’s priority for so long that it has been pending for almost twenty (20) years already.  The bill focuses on the protection of the people, biodiversity, and land as a whole.  Hopefully, as shared by Ms. Maricel Tolentino of the Campaign for Land Use Policy Now (CLUP Now!), the government would not miss the opportunity to pass this bill in the 15th Congress.

Noteworthy that HB 6545 has been approved in the 3rd reading on 20 September 2012.  Hence, the call for the Philippine Senate to give particular attention to this important piece of legislation.