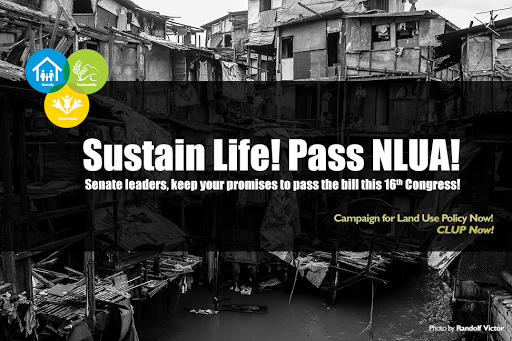 We all but lost hope when President Aquino failed to mention the National Land Use Act in his last State of the Nation Address on July 2015. For the past five years, the NLUA was included as a priority legislation. Yet, the bill remains unpassed till today.

Recently, Senate President Franklin Drilon provided a list of the bills that the Senate is prioritizing before the 16th Congress ends, and the NLUA made it to the said list. The CLUP Now! network lauds this move by Senator Drilon and we call on him to ensure our nation’s safety, security and sustainability with the passage of the NLUA. We remain optimistic that this new list will speed up the processes in the Senate and have the bill passed within the year, just before the full-blown election hype. We fervently hope that this pronouncement in the prioritization of the NLUA this 16th Congress will truly be acted upon by the Senate and will not remain merely as words written on paper.

In as much as we are thankful and supportive of our Senate leadership in their initiatives to pass the NLUA, we also challenge them to make good their promises of prioritizing the passage of this important piece of legislation. We truly want to see in the few months left this 16th Congress, the commitment, sincerity, passion and swift action of our senators in going through with the legislative process that will lead to the passage of the NLUA.

The NLUA bill already passed in the Lower House last June 2014. In the Senate, the committee report has not been released by the Committee on Environment and Natural Resources to proceed to deliberations.

This bill is long overdue and it needs to be passed immediately.

Many negative effects of climate change and poor land use planning could have been avoided if only the NLUA was passed two decades ago. The Cherry Hills tragedy that happened in 1999 could have been avoided if the subdivision was not constructed on a sloping hill. The unexpected heavy flooding brought by Typhoon Ondoy in Metro Manila in 2009 resulted to a dreadful number of casualties that left everyone in shock. The flooding was attributed to the massive deforestation in the watersheds around Metro Manila. A great number of lives in the Visayas could have been spared from super typhoon Haiyan (Yolanda), if only the residential and business areas were situated in hazard safe areas.

It might seem too late given that these tragedies happened years ago, but they must not be allowed to happen again and again. We are now preparing for “The Big One,” and what better preparation than to ensure good land use planning to lessen the vulnerability of populations from a massive earthquake? We must be aware that natural disasters will never stop coming since our country is in a very vulnerable location. The least we could do is to reduce its negative effects.

We should never be satisfied with just band-aid solutions. We have good rehabilitation projects but do these have sustainable effects? The true disaster-risk reduction management does not end on good rescue and rehabilitation operations. DRRM should not be oriented on post-disaster. It should be holistic, sustainable, and long-term.

Our present generation suffers two crises in our quality of life—environmental and social. His Holiness Pope Francis reiterated this in his recent encyclical, Laudato Si. The Pope explained the relationship between caring for the environment and the quality of life of humans; wherein the latter declines because of the lack of green spaces. This is an issue linked to the disproportionate and unruly growth of cities which is caused by the lack of and poor land use planning. Section 44 of Laudato Si states that:

“We are conscious of the disproportionate and unruly growth of many cities, which have become unhealthy to live in, not only because of pollution caused by toxic emissions but also as a result of urban chaos, poor transportation, and visual pollution and noise. Many cities are huge, inefficient structures, excessively wasteful of energy and water. Neighborhoods, even those recently built, are congested, chaotic, and lacking in sufficient green space. We were not meant to be inundated by cement, asphalt, glass and metal, and deprived of physical contact with nature.”