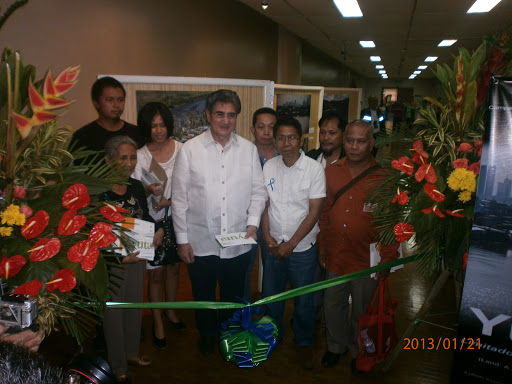 In partnership with the Office of Senator Gregorio Honasan II, the Campaign for Land Use Policy Now (CLUP Now!) unveiled last 21 January 2013 its photo essay exhibit entitled Yuta: Limitadong Kabtangan (Land: Limited Resource) at the 2nd floor of the Senate Building in Pasay City.   Senator Honasan, together with leaders from the basic sector, graced the opening of the exhibit.

The primary purpose of the display is to illustrate the ill-effects of having no national land use policy in the country.  As explained by Mr. Anthony Marzan of KAISAHAN, Inc., the convenor of CLUP Now!, “[W]e aim to show, through the power of the lens, where we are right now in land use planning and how lives, properties, and poor sectors are being threatened because of the haphazard use of our lands. We want to raise awareness, and hopefully, gain support for this very important issue.” Civil society groups have been advocating for the passage of the land use bill since the 9th Congress and they are optimistic that it will be enacted during this 15th Congress.

Relevantly, Senate Bill No. 3091 or the National Land Use Act is currently lined up for second reading at the Senate.  The House version has been approved on third reading by the House of Representatives last 20 September 2012.  The land use bill “. . . is now in our good Senators’ hands. We hope they can show their true and genuine concern for the basic sectors of our society by passing this very important legislation. We hope they show the same fervor as they did in the discussions of the Sin Tax and RH laws,” Mr. Marzan added.

The exhibit will run until 31 January 2013 at the 2nd floor of the Senate of the Philippines Building at Roxas Boulevard, Pasay City.