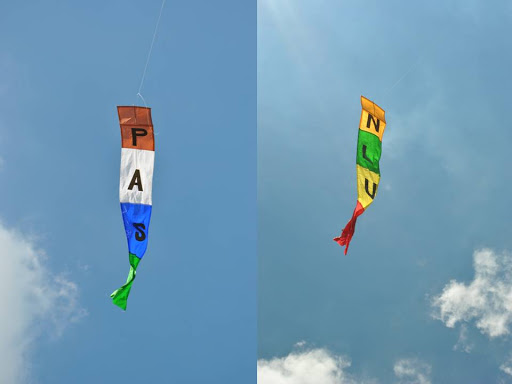 Children with their families flew around 50 kites at the University of the Philippines Sunken Garden today, bearing the message to “Pass the National Land Use Act Now!”.

“We thought of doing a Kite-Flying event to emphasize to children and their family members that the passage of a National Land Use Act (NLUA) should be a concern of all Families because it affects our very survival and that we all need space to Live, Work and Play,” said Anthony Marzan, convenor of the Campaign for a National Land Use Policy Now! (CLUP Now!).

“As summer ends, we will again be visited by typhoons and floods, which are now plaguing areas that were storm-free before. Poor or lack of appropriate land use planning  that allowed settlements in hazard prone areas has claimed the lives of so many during these storms. We don’t want more casualties from another Ondoy, Habagat, or Pepeng. We need a national land use act that would help us determine the safer areas for settlements for both rich and poor citizens,” stressed Marzan.

He added that farm lands also need to be secured to produce enough food for our children and future generations. The Filipinos’ food security is threatened right now because of rampant conversion and different priorities of the government. The government’s policies on land use, hence, need to be revisited, and a national framework on the land use must be passed.

Currently, a bill on the National land use and management (HB 6545) has been passed in the House of Representatives. A similar version is currently pending in the Senate. Specifically, SB 3091 is yet to be passed in the Senate, after it was reverted to second reading with the motion of reconsideration at the last minute by Senators Marcos, Enrile and Villar.

There are three more days of session in Congress from June 4 to 6, and land use advocates are hoping that the two-decade bill will be finally approved this 15th Congress.

“We urge all Senators to end the 15th Congress with this legacy bill for the nation. We call on newly-proclaimed Senator Gringo Honasan to strongly call for a vote for the passage of the NLUA on June 5,” Marzan said

“We Need Space” is a concept used by CLUP Now advocates in calling for the immediate passage of the National Land Use and Management Act. This concept recognizes that land is an important but finite resource. Hence, the call for the rational use and management of land and other natural resources.

A series of public activities will be undertaken from May 19 to June 6, 2013 to broaden support, heighten public awareness and the clamor for the passage of the National Land Use Act (NLUA). On May 29, farmers will have a National land use Forum. On May 31, the fisherfolk will conduct a Fluvial parade. On June 2, a Land and Food Run will be held at the Quezon Memorial Circle. This will be followed by the Senate Vigil from June 4 to 6 at the Senate grounds by the farmers, Fishers, indigenous peoples and the Urban Poor. #