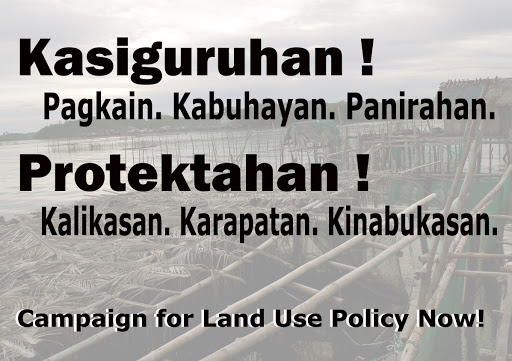 A day before the 15th Congress holds its closing sessions, farmer Rene Cerilla from Quezon and 40 other farmers trooped to the Senate to demand the inclusion of Senate Bill 3091 or the National Land Use Policy Act in the agenda for June 5 and to vote on the Bill.

In a Senate briefing called by NLUA sponsor Senator Gregorio Honasan, farmer and urban poor leaders were anxious that the Senate might drop NLUA from the agenda on June 5 despite President Aquino’s certification of the bill as urgent issued last February 1.

On February 4, Senators Bongbong Marcos, Villar and other Senators made a motion to revert the Senate Bill 3091 or the National Land Use Policy Act back to second reading after it was already approved and certified as urgent.

In recent news, Senator Marcos said he plans to introduce amendments to the proposed Land Use bill and support the call of the real estate industry to review the provision that protects agricultural lands from conversion to other uses, such as housing, infrastructure, tourism and other non-agricultural developments.

But according to Ruperto Aleroza, president of the Pambansang Katipunan ng mga Samahan sa Kanayunan (PKSK), Senator Marcos and the real estate giants should read the Senate bill more carefully because there is clear provision that these agricultural lands to be protected for food production and non-conversion still needs to be delineated to determine the exact number of hectares.

Avelino Lavador of the Urban Land Reform Movement (ULRM), meanwhile, disputed the claim of real estate developers that the current version of NLUA compromises the housing needs of the country.

“The housing backlog developers refer to can be addressed vertically, not through sprawling units. Also, the housing units sold by developers are too expensive for majority of Filipinos. Besides, they do not comply with the in-city location of socialized housing units that they are required to build under the Urban Development and Housing Act (UDHA),” said Lavador.

He adds that on the contrary, NLUA provides the framework to identify the proper location of safe settlements and socialized housing. These criteria also recognize climate change issues, environmental conservation, ancestral domains, among others.

Cerilla, Aleroza and Lavador, who are all members of the Campaign for Land Use Policy Now!, wondered why the urgent certification of the NLUA seemed to be disregarded by the Senate.

They also challenge NLUA Senate sponsor Gregorio Honasan and Senate Presidente Juan Ponce Enrile to stand up for the Bill in Plenary and call for a vote to finally decide on NLUA. #