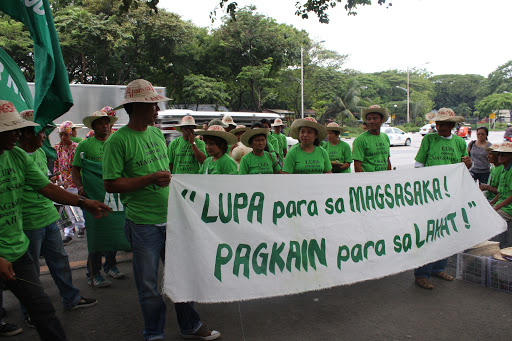 "LUPA para sa MAGSASAKA! PAGKAIN para sa LAHAT!"ÃÂÃÂ is the clamor of around eighty (80) farmer leaders and advocates who assembled in front of the Department of Agrarian Reform (DAR) in Quezon City last 03 June 2013. ÃÂÃÂ  The group expressed their disappointment on the dismal performance of DAR in the acquisition and distribution of lands. ÃÂÃÂ  The government has been implementing the Comprehensive Agrarian Reform Program (CARP) for twenty-five (25) years and yet there remains a balance of more than 700,000 hectares of agricultural lands. ÃÂÃÂ  This is unquestionably disappointing for many of our landless farmers who once believed that they will eventually own the lands they till.

It is worthy to recall that with the enactment of Republic Act 9700 in 2009, the funding for CARP implementation was extended for another five (5) years, or until June 2014 with at least Php 150 billion pesos. ÃÂÃÂ  The Land Acquisition and Distribution (LAD) balance then was 1.3 million hectares. ÃÂÃÂ  After almost four (4) years of implementation, a balance of 720,000 hectares for acquisition and distribution remains. ÃÂÃÂ  As a result, farmer leaders and advocates question the capability of DAR to distribute all agricultural lands as mandated under the law.

In a different but equally important matter, the increasing number of farmers losing control over their awarded lands is quite alarming. ÃÂÃÂ  Devising ways to remedy the widespread leasing of agricultural lands by domestic and foreign agribusinesses in the country should also be prioritized by the government.

In pushing for the fast-tracking of the LAD implementation, the farmers staged a dance protest while carrying some of their produce. ÃÂÃÂ  Thereafter, they marched straight to the Century Hall of the Quezon Memorial Circle to attend a forum hosted by the People's Campaign for Agrarian Reform Network ÃÂÃÂ  (AR Now!) as part of its Land and Food Rights Campaign. ÃÂÃÂ  Undersecretary Jose Grageda of the DAR Field Operations was there to present an assessment of CARP/ER after twenty-five (25) years and targets of DAR after 2014. ÃÂÃÂ  Undersecretary Jerry Pacturan of the DAR Support Services Office was also there to present DAR's support services program.

At the end of the day, with the objectives of ensuring the completion of LAD and the protection of agrarian reform gains, DAR and AR Now! agreed to launch an online monitoring platform on CARPER implementation status, or the CARPER Watch (http://carperwatch.net). ÃÂÃÂ  It is envisioned that this tool will make it easier for the farmers and advocates to monitor the status of their target landholdings.