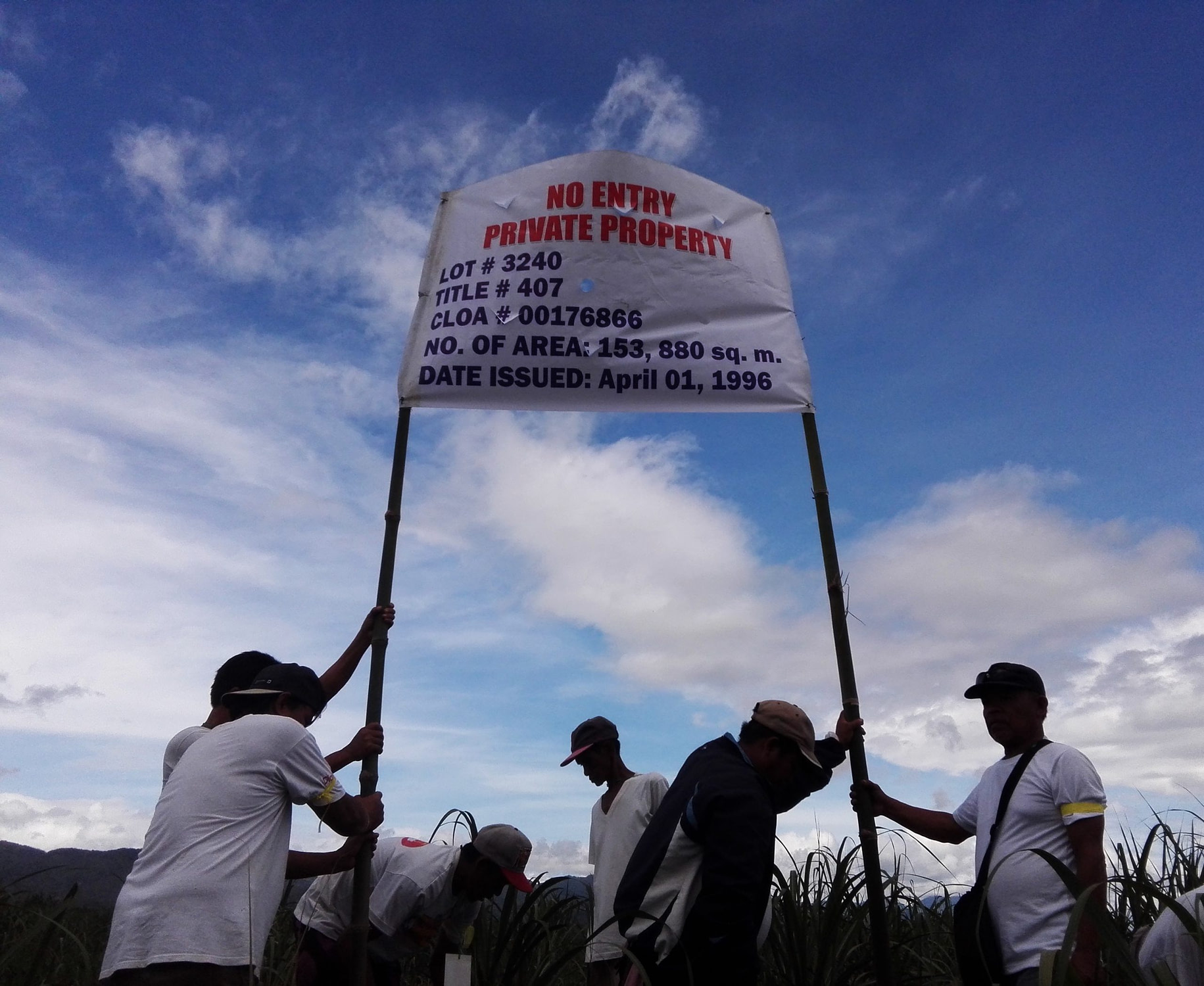 Ormoc City – After two decades of waiting, 23 farmer beneficiaries from Brgy. Sumanga and 11 from Brgy. Valencia, finally started tilling their CARP-awarded lands during a series of meticulously-planned installation activities led by the Department of Agrarian Reform (DAR) on Monday (June 20) and Tuesday (June 21), respectively. Around 300 officials and people from DAR, Philippine National Police (PNP), and other farmer and advocacy groups were present in both activities to show their support and assist the agrarian reform beneficiaries. 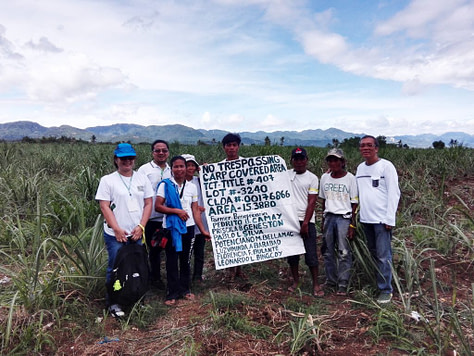 Some of the agrarian reform beneficiaries installed in a sugar land in Brgy. Sumangga, Ormoc City with representatives from KAISAHAN and DAR.

Under the comprehensive agrarian reform program, a total of 35.5649 hectares of land, previously owned by the Larrazabals, a powerful family in Leyte, was distributed among the farmers back in 1996 through the awarding of the certificates of land ownership (CLOA). However, the farmers were deprived of their rights to till the said lands as the Potenciano and Aniceta Larrazabal Enterprise Corporation (PALEC) landholding continuously used the area for large-scale sugar cane farming.

Same goes for the 19.062 hectares of rice land previously owned by the Tan Landholdings of the prominent Gerardo Tan in Brgy. Valencia.

ARBs from Brgy. Valencia prepare the markers for their lands as the DAR survey team locates the area.

Failed attempts through the years

“For the last 20 years, around ten attempts were made to plan for the installation of Sumanga and Valencia farmers. The plans were formulated together with the farmers, NGO support groups, the Philippine National Police (PNP), Armed Forces of the Philippines (AFP), various line agencies, and people from the media. However, the DAR kept deciding against the installation due to the high possibility of violence that could erupt,” explained Anthony Marzan, executive director of KAISAHAN, an agrarian reform advocacy organization that has been helping the ARBs since 1990.

“The June 2015 attempt failed due to the lack of PNP assistance which is a very important element of the whole installation process,” Marzan added. “There were some gaps in securing the PNP’s approval for assistance, and this was something that KAISAHAN and DAR has been working on in the past year.”

Days prior to the most recent attempt of installation last February 2016, Leyte Sheriff Joseph Catingub received a letter from the lawyers of Larrazabal and Tan landholdings stating about the case on erroneous coverage that is still pending at the Department of Agrarian Reform Adjudication Board (DARAB). The letter further insists that the scheduled installation should be postponed due to the pending case.

As a result, Provincial Agrarian Reform Officer (PARO) Renato Badilla recalled the writ of installation. In the PARO’s order, it was stated that the DAR finds it sound to resolve first the said issue to avoid bigger problems. An affidavit of third party claim was attached to the PARO’s order.

The enraged farmer beneficiaries, who are also trained paralegals, later filed a 13-page motion for reconsideration (MR) to DAR asking PARO to review his decision. After a few days, Badilla recalled the PARO’s order.

A series of installation and security planning were held in the following months leading to the June 2016 installation. Many other planning issues came out during the said meetings that caused the installation schedule to be moved several times.

“It was an exhausting year for everyone especially to the ARBs, but these incidents did not dampen the spirit of our farmers in fighting for their land rights,” stated Atty. Claire Demaisip, legal officer of KAISAHAN, who has been assisting the ARBs. “In fact, the past year challenged and empowered our trained paralegals at the same time. We hope that the events here in Sumanga will finally end the oppression of the remaining uninstalled ARBs in Leyte.”

Around 1,000 ARBs are yet to be installed in Ormoc and Kananga, Leyte.

Also present during the installation was the Commission on Human Rights (CHR) Regional Director, Atty. Paquito Nacino, to keep an eye on the possible human rights violation that may occur during the activities.

Prior to the installation, a number of abuses were already reported by the ARBs.

“From the very beginning, both owners of the landholdings repeatedly resisted the farmers’ installation using various means. The farmers were kept in fear with threats and intimidation. Some former DAR personnel even delayed the process of farmer installation, aiding the landowners’ resistance,” explained Gilbert Negad, project officer of KAISAHAN in Leyte and a human rights defender. “The PALEC farmers were called by their respective landowners after they received the CLOA and were told that they could not be installed in their areas. PALEC even resettled the CLOA holders on hilly areas of the property.”

“There was an attempt to install the farmer beneficiaries sometime in 2009 on the Tan property. But the grandson of the landowner (LO), together with policemen in Valencia and their lawyer blocked the installation. At that time they found that the installation order brought by the MARO had no date. Armed people were also sighted in Sumanga on the day of the previous installation attempts.”

“Nobody dared to enter the area from both landholdings after the CLOAs were issued. The DAR did not even attempt to install the CLOA holders for unknown reasons,” said Negad. “Blocking the installation is a form of human rights violation. Violation of land rights is a violation of human rights.”

Pablo Silva also recalled some of his experiences of human rights violations in the past year since he started joining the attempts of occupying the PALEC lands.

On February 4, 2016, on their way home from a paralegal training, two unidentified men in motorcycles followed him, and the other two members of SUFA, Rodriga Bertulfo and Virgilio Geneston.

After the installation attempt last February 10, 2016, Silva received a threat from one of the men of PALEC that he and his family should leave their house as soon as possible because he joined the installation attempts. Silva’s house is located in a PALEC area. He was also fired from being a farmworker of the said corporation.

Last February 26, an unknown man approached Silva in a sari-sari store in Brgy. Can-Adieng, a neighboring barangay of Sumanga, called him by his pet name and asked him about his intentions of occupying the PALEC land.

Various means of resistance were experienced even during the installation activities.

In Brgy. Sumangga, as the survey team locates the area, Joel Rubin who introduced himself as representative of PALEC, tried negotiating with Sheriff Catingub. He was accompanied by Ramil Labilagon, farm coordinator of PALEC. According to Rubin, the area is a private property that belongs to PALEC. DAR officials and KAISAHAN lawyers explained that the area does not belong to PALEC since the CLOAs were issued to the farmers 20 years ago.

Apparently, Rubin is the chairman of Brgy. Patag, a neighboring barangay of Brgy. Sumangga.

At around 2 PM, some farm workers of PALEC, led by Timoteo Lagahit, started pitching tents in the installed areas. The purpose of the tents is to serve as a temporary shelter for Lagahit’s group as they guard the subject area. According to Lagahit, he was just doing what was instructed to him by his bosses. They dismantled the tents after a talk with Catingub.

Sheriff Joseph Catingub speaks with the farm workers who claim that they are the real ARBs for the subject area.

It was 3:15 PM when Catingub closed the activity and declared that the ARBs are officially and fully installed.

However, minutes after the DAR officials left the area, Atty. Adelito Solibaga, Jr. arrived at the scene. Solibaga introduced himself as a lawyer representing the group of farmers who were claiming that thay are the rightful beneficiaries of the subject area. The same group of farmers sent a certain letter to Catingub that caused the postponement of the February 2016 installation.

Solibaga was accompanied by Anthony Baba Herrera, a relative of the owners of PALEC.

Since DAR was already not around, Solibaga faced the lawyers and the executive director of KAISAHAN. The dialogue mainly revolved around the legality of the implementation of the Writ of Installation. “We are opposing your so-called installation,” emphasized Solibaga. He also pointed out that his party is not acknowledging the CLOA of the “so-called farmer beneficiaries.”

Atty. Peoro insisted Solibaga to review the provisions of RA 6657 or the Comprehensive Agrarian Reform Law so that he would see that every component of the implemented activity was done legally.

However, Solibaga was firm that his clients will never leave the area since their party is not in favor of the installation. According to him, the installation should not be implemented in the first place since there is a pending case. Marzan and Demaisip reiterated that under RA 9700, no pending case shall postpone the implementation of the Writ. Only a TRO from the Supreme Court can stop installing the CLOA holders.

The KAISAHAN team made it clear, however, that the DAR legal team should be the ones discussing this matter. “Nandito lang kami para umalalay sa mga farmer beneficiaries,”Â said Marzan. “DAR has the authority over this matter.”

“It is definitely necessary to ensure the safety of the ARBs after installation, given that they have already received grave threats prior to occupying the lands,” stated Atty. Peoro. “That is why we insisted in putting up a PNP detachment until the peace and order in the area is assured. Being formally installed does not guarantee that the farmers will be spared from the possible abuses by the former land owners or intruders. We must focus on the peaceful possession of the land.”

Sheriff Catingub expresses his gratitude for the support given by the PNP.

In charge of the security in both areas during and after installations are PSUPT. Joel Camacho, acting Ormoc City Public Safety Company commander, and Police Chief Inspector Pacifico Baliton of Ormoc PNP.

Support to the farmers

Valencia farmer beneficiaries are all-smiles with DAR, PNP officials, and their support group after officially being installed

Lazaga also said that having his own land will definitely improve their quality of life.

“Now that the ARBs are installed, we must prioritize the provision of support services to ensure the sustainability of their lands. The CARP does not end on the distribution of lands,” Marzan concluded as he joined the group in the sumptuous lunch prepared in celebration of the long overdue land occupations. //