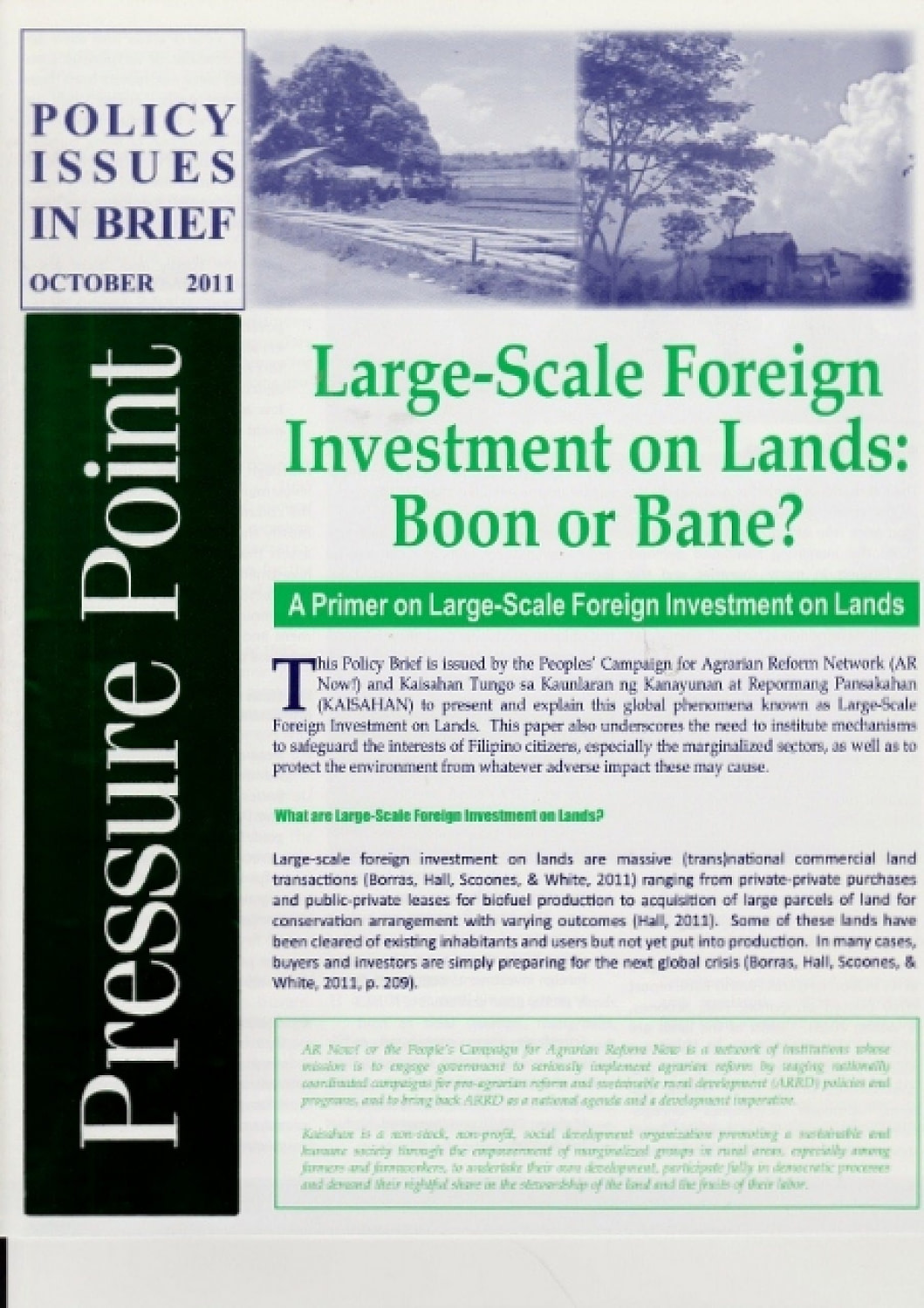 A PRIMER ON LARGE-SCALE FOREIGN INVESTMENT ON LANDS

This Policy Brief is issued by the Peoples’ Campaign for Agrarian Reform Network (AR Now!) and Kaisahan Tungo sa Kaunlaran ng Kanayunan at Repormang Pansakahan (KAISAHAN) to present and explain this global phenomena known as Large-Scale Foreign Investment on Lands.   This paper also underscores the need to institute mechanisms to safeguard the interests of Filipino citizens, especially the marginalized sectors, as well as to protect the environment from whatever adverse impact these may cause.

What are Large-Scale Foreign Investment on Lands?

Large-scale foreign investment on lands are massive (trans)national commercial land transactions (Borras, Hall, Scoones, & White, 2011) ranging from private-private purchases and public-private leases for biofuel production to acquisition of large parcels of land for conservation arrangement with varying outcomes (Hall, 2011).   Some of these lands have been cleared of existing inhabitants and users but not yet put into production.   In many cases, buyers and investors are simply preparing for the next global crisis (Borras, Hall, Scoones, & White, 2011, p. 209).

What is the global context?

The international frenzy for land was driven by the recent global economic crisis, the food price hike which heightened in 2007-2008, the increasing mandated demand for biofuels in many countries and the inescapable effects of climate change which have added to the demand for land for agricultural production for food, energy and carbon credits (Bernabe, 2010).

According to the International Food Policy Research Institute (IFPRI), the global estimate on large-scale foreign land investments reached about 20 million hectares (von Braun, 2009).   In another report, the World Bank placed the figure at 45 million hectares (World Bank report 2010 quoted on Borras, Hall, Scoones, & White, 2011).     Most of the lands are in Africa, Latin America and Southeast Asia and lands already owned by rural communities under some tenure systems, although sometimes unregistered.   Oftentimes, States consider “idle” lands as available for disposal to foreign investors.   However, although these lands may be underused, very little is not owned, vacant or unused (Liversage, 2010).

This phenomenon is, however, not limited to agricultural lands as it can also be found in coastal areas and ancestral domains of indigenous peoples. In effect, such land investments take away the control of small producers over their resources to commercial uses, leading to hunger, poverty and displacement.

What are the current issues concerning Large-Scale Foreign Investment on Lands in the Philippines?

Although, some studies show that such investment on lands somehow benefit the communities, the rewards, if any, are mostly short-term.   By and large, studies assert that the incursion of such foreign investments unduly expose the marginalized sectors- the farmers, fisherfolk and indigenous peoples – to threat of displacement and loss of control and ownership over and possession of their lands.

What laws and policies govern Large-Scale Investment on Lands in the Philippines?

Despite the existence of these laws and regulatory policies governing large-scale investments on land, the rights of marginalized communities who are party to the deals still remain unprotected.   Loopholes render the regulatory powers of these laws ineffective and insufficient to regulate such investments.

What are the types of investment deals on land in the Philippines?

DAR AO 9 Series of 2006 identified a number of Agribusiness Venture Agreements (AVA) between Agrarian Reform Beneficiaries (ARBs) and the Private Sector.   The same AO defined AVAs as entrepreneurial collaboration between ARBs and investors to implement an agribusiness venture involving lands distributed under CARP.   AVAs include the following:

The Fisheries Code of 1998 and Fisheries Administrative Order No. 197 Series of 2000 provide the rules and regulations governing the lease of public lands for fishpond development.

Fishpond Lease —  An agreement entered into by and between the Secretary of Agriculture and qualified fishpond applicant for the use of public land for fishpond development purposes for a period of twenty-five (25) years.

Under the SEZ Act of 1995, Ecozones may contain any or all of the following:

Enterprises within the zone are granted preferential tax treatment and immigration laws are more lenient.

DENR Administrative Order No.   99-34 enshrines the guidelines for Foreshore Lease Contract (FLC), an agreement between the Department of Environment and Natural Resources (DENR) covering foreshore lands, marshy lands and lands bordering bodies of water for commercial, industrial and other productive uses other than agriculture.

Why is there a Need to Pass a Bill to Monitor and Regulate Large-Scale Foreign Investment on Lands?

The gravity of the issues concerning large-scale foreign investment on lands, the current influx of such investments in the country and the lack of regulatory measures to govern them and effectively protect the rights and interests of Filipinos, especially the marginalized groups, sufficiently justifies the need for an appropriate and effective law.   For these reasons, a bill called An Act Regulating Foreign Large-Scale Investment on Lands ÂÂRegulation on Large-Scale Foreign Investment Act, ÂÂ is being proposed.

What are the Objectives of the Proposed Large-Scale Foreign Investment Act?

What are the Salient Provisions of the Bill?

The bill provides a clear definition of what constitutes large scale foreign investment on lands taking the local context into account. Large-Scale Foreign Investment on Lands is the leasing, acquisition or use of land exceeding an aggregate area of 5 hectares in the Philippines by foreign entities; or entering into a joint venture agreement, partnership, cooperation or similar business agreements where the control or the beneficial use of land with an aggregate area exceeding 5 hectares is given to the foreign entity.

Mechanisms for participation and gathering the position of affected sectors and communities shall be conducted.   It involves giving notice of hearing/consultation to affected sectors and communities through publication or posting in conspicuous places, the conduct of reasonable number of hearings and solicitation of positions and the public presentation and validation of the planning results before the final adoption of the plans.

The bill likewise identifies the foreign investment deals on land which shall be covered by the proposed measure. Specifically, it will include all contracts, agreements, negotiations, talks and deals involving foreign investment on land exceeding an aggregate of 5 hectares shall be publicly disclosed.   It shall be approved by the National Regulatory Board on Foreign Land Investments before it is legally implemented.   The regulation covers all investment deals on land between:

A National Regulatory Board will be created for the purpose of regulating Foreign Investment on Lands.   The Board which will be under the Office of the President and shall have the power to approve or disapprove large scale foreign investment agreements on land, based on the guidelines it will formulate.

It shall also create its own Secretariat, formulate its own organizational plan, staffing pattern and internal rules.

The minimum lease rental shall be computed based on the formula set by the Board and shall be incorporated in the terms and conditions of the lease agreement.

The Board shall undertake an inventory of all lands targeted for large-scale foreign investment in the Philippines within six (6) months after the passage of the Act.

A Congressional Oversight Committee will be established in order to monitor the performance of the Board and to propose legislative actions in relation to foreign land grabbing.

What are the Underlying Principles for Approval of Large-Scale Foreign Investment on Lands?

In line with these principles, the bill provides:

What is the Composition of the National Regulatory Board on Foreign Investment on Lands?

The Board shall be composed of the following:

A Board Chairperson will be appointed by the President for a term of 3 years from among the nominees to be submitted by the National Anti-Poverty Commission (NAPC).   The basic sector representatives shall serve a term of 3 years.   The other members of the Board shall have concurrent term with their position.

Hall, R. (2011). The Many Faces of the Investor Rush in Southern Africa: Towards a Typology of Commercial Land Deals. ICAS Working Paper Series, Vol. No. 2, The HAgue: International Institute of Social Studies (ISS) .