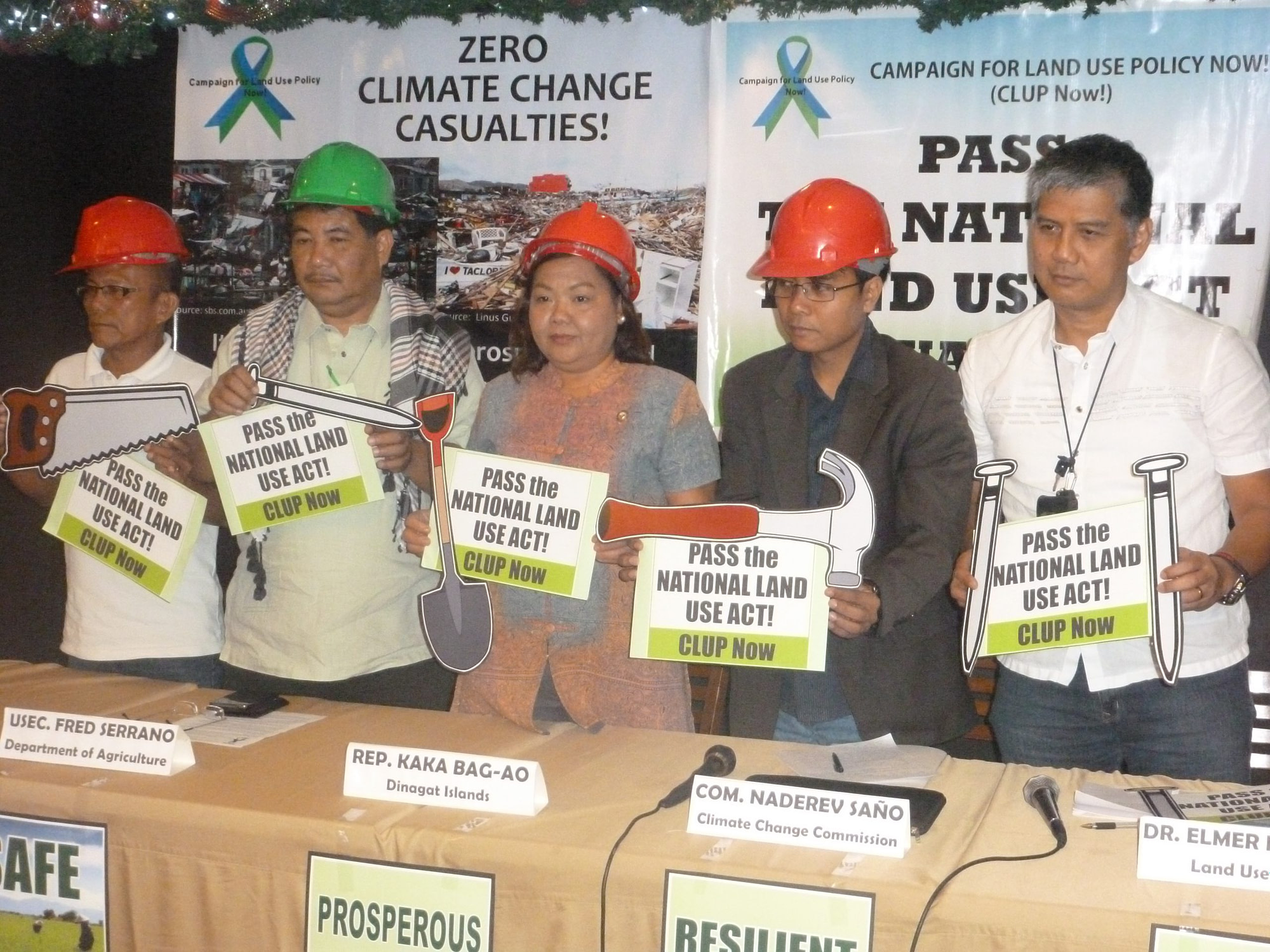 Quezon City, Dec. 4 — We have had enough of partial solutions to climate disasters!  In the aftermath of Super Typhoon Yolanda, it is high-time to rebuild safer, climate-resilient and prosperous communities in the Visayas and all over the country through proper and comprehensive land use planning based on the proposed National Land Use Act or NLUA.

Better than just enforcing No Build Zones in restoring Tacloban and other Visayas towns, CLUP Now! challenges this administration to immediately pass a national policy that provides comprehensive land use planning guidelines to formulate a national physical planning framework that clearly identifies areas for protection, production, settlements and infrastructure.

“Focusing on disaster preparedness is a quick fix and comes from the wrong premise that every natural phenomenon would necessarily result in a disaster, with people dying, infrastructure damaged, and crops destroyed. What we need is to become pro-active and responsible policy-makers during more sober times. This is our chance to consolidate efforts towards protecting our people from loss of lives and livelihood, integrating the concerns of affected sectors, and putting our foot down to say no to complacency and neglect!” stressed Bag-ao.

Meanwhile, after his emotional appeal at the Climate Change negotiations in Warsaw, Commissioner Yeb Saño  now warned Filipinos that there will come a time (perhaps, very soon) that it may be too late to rebuild properly, given the context of the swiftly shifting climate.

“In fact, for the thousands of people who lost their lives and homes, it is too late. But we must continue to strive to rehabilitate ‘safe, prosperous and resilient’ communities to end these massive disasters and achieve social, economic and environmental stability,” he added.

Under the proposed NLUA, or House Bill 108, critical watersheds and forests, and even prime agricultural lands, are delineated and categorized as “Protection Land Use” which means that they should be rehabilitated and preserved, and they cannot be converted to any other use.

NLUA also prohibits activities in critical areas that reduce riverine habitat and alter flood patterns, such as large scale irrigation and river channelization.  Risk reduction and mitigating measures are required in areas considered as high risk and danger zones, especially where there are large settlements of communities.

Year after year, communities of the poor majority, are continually displaced by typhoons and other natural calamities. In 2009, 993,227 families were affected and 464 people reported dead due to typhoon Ondoy. In 2010, typhoon Sendong claimed at least 2,512 lives. In 2011, at least 1,067 individuals were recorded as dead and 216,817 houses were reported damaged due to typhoon Pablo. This year, as of 28 November, at least 5,560 individuals allegedly died and there are still at least 1,757 missing individuals.

CLUP Now convenor Anthony Marzan, said that many of the displaced and/or affected communities and damaged infrastructures stand in danger zones. While disaster risk reduction and management (DRRM) plans and programs could have lowered the number of victims and costs of damages, well-crafted and strictly implemented Comprehensive Land Use Plans (CLUPs) could have ensured, the citizens’ “right to life, liberty, and security” (Article II, Universal Declaration of Human Rights). CLUPs should have not allowed the housing developments in high risk areas, conversion of critical biodiversity areas to industrial zones, etc.

For Agriculture Undersecretary Fred Serrano, the more important question now is not why we need NLUA but rather why it is still not there. For any land use act to be effective, it is very important to include prime agricultural lands under Protection Land Use to ensure that future generations will be fed, especially in the face of climate change.

“Land is a very important resource since it is our main source of food, settlements, livelihoods, biodiversity, among others. Sustainable and genuine national development can only come from proper, comprehensive and just land use planning,” said Serrano.

Rep. Bag-ao further believes that NLUA will not only prepare the country for calamities but to help us mitigate climate change which is the primary cause for the aggravation of these calamities.

“The lessons of Yolanda, Pablo, Sendong, and Ondoy should not take a backseat. The great thing about it is that this will be our concrete contribution for the protection of our nation and peoples, this is a long-term solution and we are putting it in place even before the next calamity leaves us clueless. Because we have the answers and we won’t stop at raising the hard questions,” said the NLUA bill sponsor.

NLUA has been pending for approval since the 8th Congress, when the Cherry Hills tragedy claimed 60 lives. HB 108, filed by Rep. Bag-ao, passed the Committee level at the House of Representatives last November 20 and will  now be subjected to the Committee on Appropriations. No similar deliberations have been taken up in the Senate so far by the Committee on Environment and Natural Resources headed by Sen. Loren Legarda.

CLUP Now! calls on President Aquino to once again, certify the NLUA Bill as URGENT and demands that he ensures legislators of this Congress heed his call and hasten more progressive climate change mitigation solutions. #